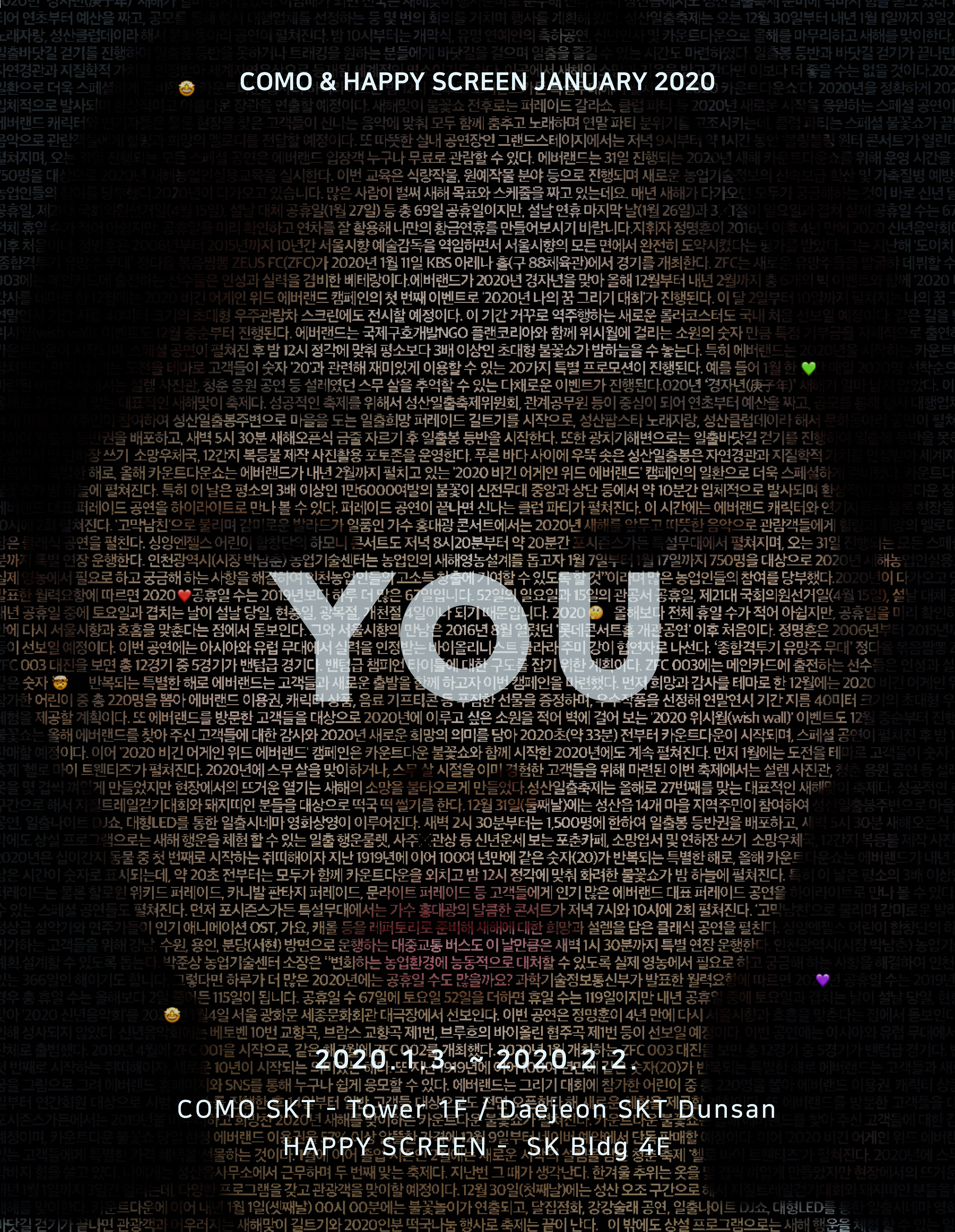 *Closed on weekends and public holidays

Cold and chills are still lingering, but the Salvation Army charity pot has covered up its traces and every corner of the city is filled with a sense of vitality to usher in the new year. Means of exchanging greetings and extending regards are being replaced by technologies such as SNS and video/live chat. For modern people who prefer not-so-close ties and relationships with others, SNS in which active interaction and interchange occur serves as a daily space that acts as a passageway to connect with others and a way to express themselves.

Celebrating the new year of 2020, COMO&HAPPY SCREEN Exhibition 《YOU》 introduces Face of City_Seoul(2019) and Snow(2019) by Jae Hyung Lee, who collects SNS data in Seoul in real-time and uses machine learning to learn and visualize the state of city’s emotions.

Face of City_Seoul is an artwork that depicts citizens’ facial expressions in real-time using SNS data in Seoul region. It composes a visual form using an AI that has learned the language data extracted based on three keywords: #winter, #new year, and #hope, from streams of timelines on SNS. The urban screen that puts on various faces of citizens links the emotions from the online records of exchanges and communion to the offline space.

Visitors will also be able to come across wintery emotions and hopeful spirits of the new year through Snow, an artwork in which words float about in the air like snowflakes. It also uses an AI that selects the words to be displayed on the screen from the extracted data under the same three keywords. The texts likened to snowflakes indicate the easily volatilizing linguistic data taken from the SNS. These are the records of each individual’s confessions fraught with temporary emotions and texts that are entangled, enriched, or extinguished, which are presented as snowy messages of hope.

This exhibition is a collaborative work that we create together. It is an exhibition that is made by us and shows every one of us. People can exchange the wishes and emotions of countless others as they face text messages and human portraits that change on the basis of real-time data. Starting off the new year, we hope to share the warmth of the new beginning by presenting people’s wishes gathered from individuals’ virtual space as a form of society’s condensed emotions. Face of City_Seoul touches on feelings and emotions arising in the city. This work is a data visualization project in which the source of emotions representing a city is discovered in the process of analyzing a multitude of social networking services (SNS) or websites from the relevant region and expressing them in facial expressions that change in real-time. In this exhibition, Jae Hyung Lee presents feelings and emotions detected in Seoul with keywords like “winter”, “new year”, and “hope” based on the linguistic data extracted from the downtown areas of Seoul.

Snow, a work featuring messages of hope in the form of falling snowflakes, is a real-time showcase of wishful and positive messages selected by Artificial Intelligence. It utilizes AI that has learned about the emotions of citizens based on the SNS messages generated in Seoul. Like beams of hope for the new year, texts displayed on the screen bring hopeful spirits to citizens around the city as they float about like snowflakes.

Jae Hyung Lee studied art and media at Korea University and Yonsei University. He has carried out a number of public art projects using a wide array of media technologies such as LED, interactive technology, and AI. He was in charge of showcasing the media façade for Coway’s promotional booth at Consumer Electronics Show (CES) 2017 in Las Vegas. In 2019 he installed a whale-shaped three-dimensional work of media art titled Under the Hope at Jeju International Airport. He plans on executing a media façade project of Face of City at Grand Park in Los Angeles in 2020.