[Webinar] Art, AI and Everything Else

For over two decades, Art Center Nabi has been committed to exploring the role of the arts and new technologies to gain new insight in human possibilities and addressing social problems. Nabi has invited artists to develop projects that use technology to overcome social divisions, counter to racial violence, debunk stereotypes, as well as nurture emotional connectedness, cultural engagement, political participation. In general, it has promoted the role of the arts in enhancing social solidarity and operated on the assumption that it can improve the quality of life.

In celebration of two decades of practice Nabi will host a series of web-based seminars.

If you would like to watch the webinar, please apply for RSVP through the link below. 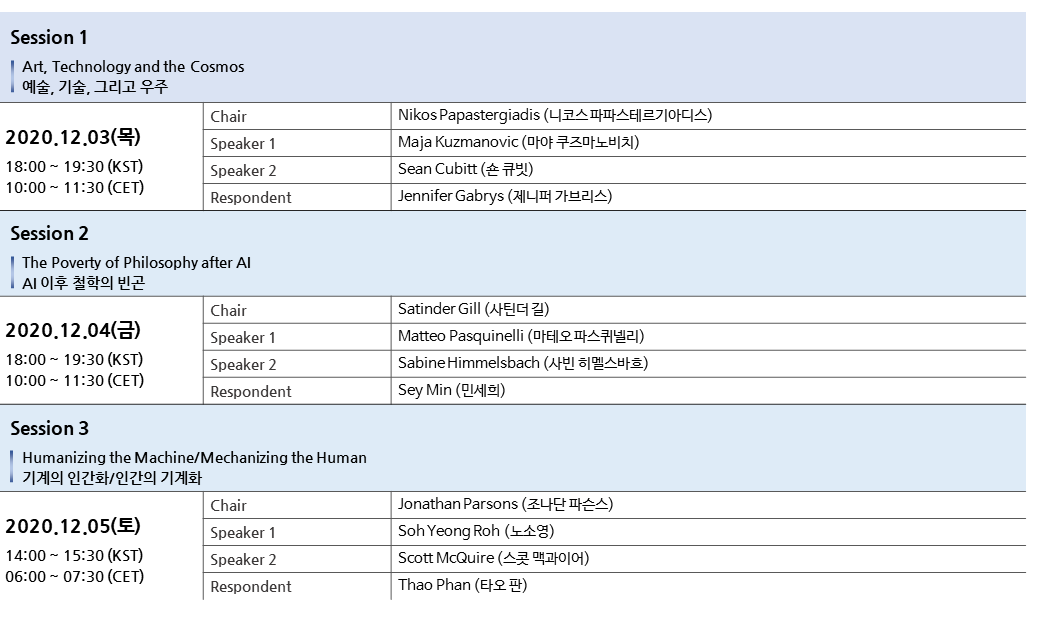 *The event will be held in English.

[About the Sessions & Speakers]

Art, Technology and the Cosmos

A pan-demic is a good time to evoke the pan-demos. Mobility has become a central feature of contemporary society. Art has been used as an advocate for flow, interaction and exchange, as well as a way of opposing disruption, exploitation and inequality. In this first seminar we throw open the scale of enquiry and experimentation. Art is a technology, and Cosmos is the space-time of everything. However, an ancient definition of cosmos refers to the activity of making a space-time attractive for the Other. The recent developments in contemporary art have been directed towards removing political boundaries and enhancing sociality. When schedules, plans, and models for organizing our ‘liquid life’ are on pause, space-time becomes an object of anxiety. This first session will be surveying the history of technology and how it brings us to the point that we find ourselves. We will zoom out to the widest questions and zoom in to specific examples from recent contemporary practices in art and technology. We will explore the possibilities for critique, and the possibility for art to stimulate sociality and solidarity in an era of masks and the fear of contagion that too easily becomes fear of community. How will artists conduct face-to-face encounters and operate skin-to-skin exchanges? Is a virtual public sphere and life on Zoom enough?

Nikos Papastergiadis is a (Greek / Australian) Director of the Research Unit in Public Cultures and Professor at the School of Culture and Communication at the University of Melbourne and Visiting Professor in the School of Art, Design and Media, at Nanyang Technological University, Singapore. His current research focuses on the investigation of the historical transformation of contemporary art and cultural institutions by digital technology. His publications include Modernity as Exile (1993), Dialogues in the Diaspora (1998), The Turbulence of Migration (2000), Metaphor and Tension (2004) Spatial Aesthetics: Art Place and the Everyday (2006), Cosmopolitanism and Culture (2012), Ambient Perspectives (2014),  On Art and Friendship (2020), Museums of the Commons (2020).

Maja Kuzmanovic is a generalist—media artist, experience designer, writer, speaker and process facilitator with a fondness for future-crafting. She is the co-founder of FoAM, a pan-European network of transdisciplinary labs at the intersection of art, science, nature and everyday life. Maja spends most of her time in between fields and cultures, on the lookout for emergent patterns of change. Her academic background is in design futures, interactive media and transdisciplinary leadership. Her work has been recognised by the MIT's Technology Review and the World Economic Forum, awarding her the titles of Top 100 Young Innovator and Young Global Leader.

Sean Cubitt is Professor of Screen Studies at the University of Melbourne. His publications include The Cinema Effect (MIT 2004), EcoMedia (Rodopi, 2005), The Practice of Light (MIT 2014), Finite Media: Environmental Implications of Digital Technologies (Duke, 2017) and Anecdotal Evidence: Ecocritique from Hollywood to the Mass Image (OUP, 2020). Co-editor of The Ecocinema Reader: Theory and Practice (AFI 2012) and Ecomedia: Key Issues (Earthscan 2015) and series editor for Leonardo Books at MIT Press, his research focuses on the history and philosophy of media, political aesthetics, media art history, ecocritique, and practices of truth.

Jennifer Gabrys is Chair in Media, Culture and Environment in the Department of Sociology at the University of Cambridge. She leads the Planetary Praxis research group, and is Principal Investigator on the ERC-funded project, Smart Forests: Transforming Environments into Social-Political Technologies. She also leads the Citizen Sense and AirKit projects, which investigate the use of environmental sensors for new modes of citizen involvement in environmental issues. Both of these projects have received funding from the European Research Council. Jennifer is the author of How to Do Things with Sensors (2019); Program Earth: Environmental Sensing Technology and the Making of a Computational Planet (2016); and Digital Rubbish: A Natural History of Electronics (2011).

The poverty of philosophy after AI

In 2008 Chris Anderson declared that the data deluge had brought about the end of theory. The speed of computation had not only marginalised but eliminated a model of thinking that involved qualitative evaluation. How do we reimagine the role of thinking in action? Is there action without thinking? Has thinking been superseded by technologies of capture, storage and processing? AI and algorithms have been internalised as a normal feature of everyday life. Their banality eludes our attention while summoning deep anxieties. Do we have a vocabulary and conceptual understanding that can keep pace with this change? In this seminar we explore the disjunction between technological advances, modes of thought and models of governance. We question the belatedness of philosophy’s grasp on technology and the consequences of the differential speeds, places and temporalities where technology, thought and politics operate.

Satinder Gill is based with the Centre for Music and Science, Faculty of Music, University of Cambridge. Following her PhD in Experimental Psychology (1995) at the University of Cambridge, she has held a number of posts including: Research Scientist with NTT's Basic Research Labs, Japan (1997-1999); Dialogue Team Leader, CKIR, Finland and CSLI, Stanford University (2000-2003); and Senior Research Fellow, Middlesex University, London (2004-2009). Her research investigates the pragmatics of rhythm and sense-making in speech, gesture, and music, as a critical lens on the changing nature of presence and tacit engagement in face-to-face and technology-mediated communication; She is Managing Editor of AI & Society: Knowledge, Culture and Communication, Editor of Cognition, Communication, and Interaction: Transdisciplinary Perspectives on Interactive Technology (2007), and author of Tacit Engagement: Beyond Interaction (2015).

Matteo Pasquinelli (PhD) is Professor in Media Philosophy at the University of Arts and Design, Karlsruhe, where he is coordinating the research group on Artificial Intelligence and Media Philosophy KIM. He edited the anthology Alleys of Your Mind: Augmented Intelligence and Its Traumas (Meson Press) and, with Vladan Joler, the visual essay The Nooscope Manifested: AI as Instrument of Knowledge Extractivism (nooscope.ai). His research focuses the intersection of cognitive sciences, digital economy and machine intelligence. For Verso Books he is preparing a monograph on the history of AI provisionally titled The Eye of the Master.

Since 2012, Sabine Himmelsbach is the director of HeK(House of Electronic Arts Basel). After studying art history in Munich, she worked for galleries in Munich and Vienna from 1993–1996 and later became project manager for exhibitions and conferences for the Steirischer Herbst Festival in Graz, Austria. In 1999 she became exhibition director at the ZKM | Center for Art and Media in Karlsruhe. From 2005–2011 she was the artistic director of the Edith-Russ-House for Media Art in Oldenburg, Germany. Her exhibitions at HeK in Basel include Ryoji Ikeda (2014), Poetics and Politics of Data (2015), Rafael Lozano-Hemmer: Preabsence (2016), Lynn Hershman Leeson: Anti-Bodies (2018), Eco-Visionaries (2018), Entangled Realities (2019) and Real Feelings, Emotions and Technology (2020). As a writer and lecturer, she is dedicated to topics related to media art and digital culture.

Sey Min is a data visualization artist and designer, whose interest is in dealing with live data sets in various media formats. She makes projects that reimagine how humans relate to technologies, to societies and cities, and to environments. Combining elements of environmentology, visual art, programming and data storytelling, her projects range from building a real-time interactive information graphics system for a music club (Gender Ratio, 2007) to visualizing Seoul City expenditure data (City DATA: Seoul Daily Expenditure, 2014). Her works have been shown at Korea National Museum of Modern and Contemporary art, TED 2011, TEDGlobal 2012, Art Center Nabi in Seoul, Lift conference experience, and have featured on CNN Asia, Lift09, and aliceOn.net. She was named a 2011 TED Fellow, and a 2012 TED Senior Fellow. She is the founder of randomwalks, a data visualization studio in Korea.

Tools have always been part of how we define human ‘nature’. Our everyday use can make them feel like parts of our bodies. In habitual use there is constant feedback between us and them. With time and use the border between body and tool dissolves. Now tools also appear as models, but all models, for good or ill, fail us. The dominant understanding of AI flips between two models: either we maintain mastery over the tool, or the technology acquires sufficient agency to consume its master. This seminar goes beyond this dominant paradigm to consider a more fundamental question: what is the intelligence in technology? How do we align our social values and human desires with the dynamism of tools that also remake ‘us’ in the process of using them? If we go beyond the dichotomy between AI as engine of utopia and AI as corporate and exploitative logic, can we also imagine a form of AI that has no utility, one that is not designed according to a service function? Would this perspective allow us to consider ecological modes of intelligence not confined to the human mind, but distributed across and constituted by urban, natural and technological environments?

Jonathan has over twenty five years of experience working as an artistic director, curator and creative producer in Australia and internationally. He is currently Artistic Director of Experimenta, Australia’s preeminent media arts organisation based in Melbourne. He was the Creative Director of Robotronica (2013-2019), a biennial festival of robotics and interactive design at Queensland University of Technology (QUT). In 2013 he was the Director of ISEA2013 in Sydney. He has artistically led and collaborated on a broad range of cultural programs and events across all art forms including for the State Library of Queensland, Queensland Art Gallery, Queensland Performing Arts Centre, Riverfestival, Byron Bay Writers Festival, Adelaide Festival of the Arts, London International Festival of Theatre, Powerhouse Museum, Awesome Festival, Sydney Gay and Lesbian Mardi Gras Festival and Pacific Wave Festival.

Self-taught in art and technology, Soh Yeong Roh is said to have pioneered the new media art scene in Korea by founding Art Center Nabi in 2000. Her experience in the field goes back to 1991 when she served as head of Art and Technology Exhibition at Daejeon Expo. Seeing the possibility of digital technology transforming much of our lives, she began to explore how we could use the technology to serve humanity, which has become her lifelong mission. Besides running Art Center Nabi, a powerhouse of media art with its lab and education programs, she serves as a board member at Advanced Institutes of Convergence Technology, Creative Commons Korea, and P.A.T.I., an alternative design school. She is also an adjunct professor at the Graduate School of Convergence Science and Technology, Seoul National University, and a visiting professor at the Department of Art and Technology, Sogang University.

Scott McQuire is Professor of Media and Communications in the Faculty of Arts at the University of Melbourne. He is one of the founders of the interdisciplinary Research Unit for Public Cultures where he researches the nexus of digital media, contemporary art, urbanism, and social theory. His recent books include Geomedia: Networked cities and the future of public space (2016), Chinese and Russian translations (2019), and Art seen under digital light: photography, the image and the aesthetics of data (2018). He is currently co-editing Communicative Cities and Urban Space to be published by Routledge in 2021.

Thao Phan is a Postdoctoral Research Fellow at the Alfred Deakin Institute for Citizenship and Globalisation. She is a feminist STS researcher who analyses the technologisation of gender and race in AI and algorithmic culture.

Research Unit for Public Cultures and the Communicative Cities Stream in the Center of Visual Arts, University of Melbourne