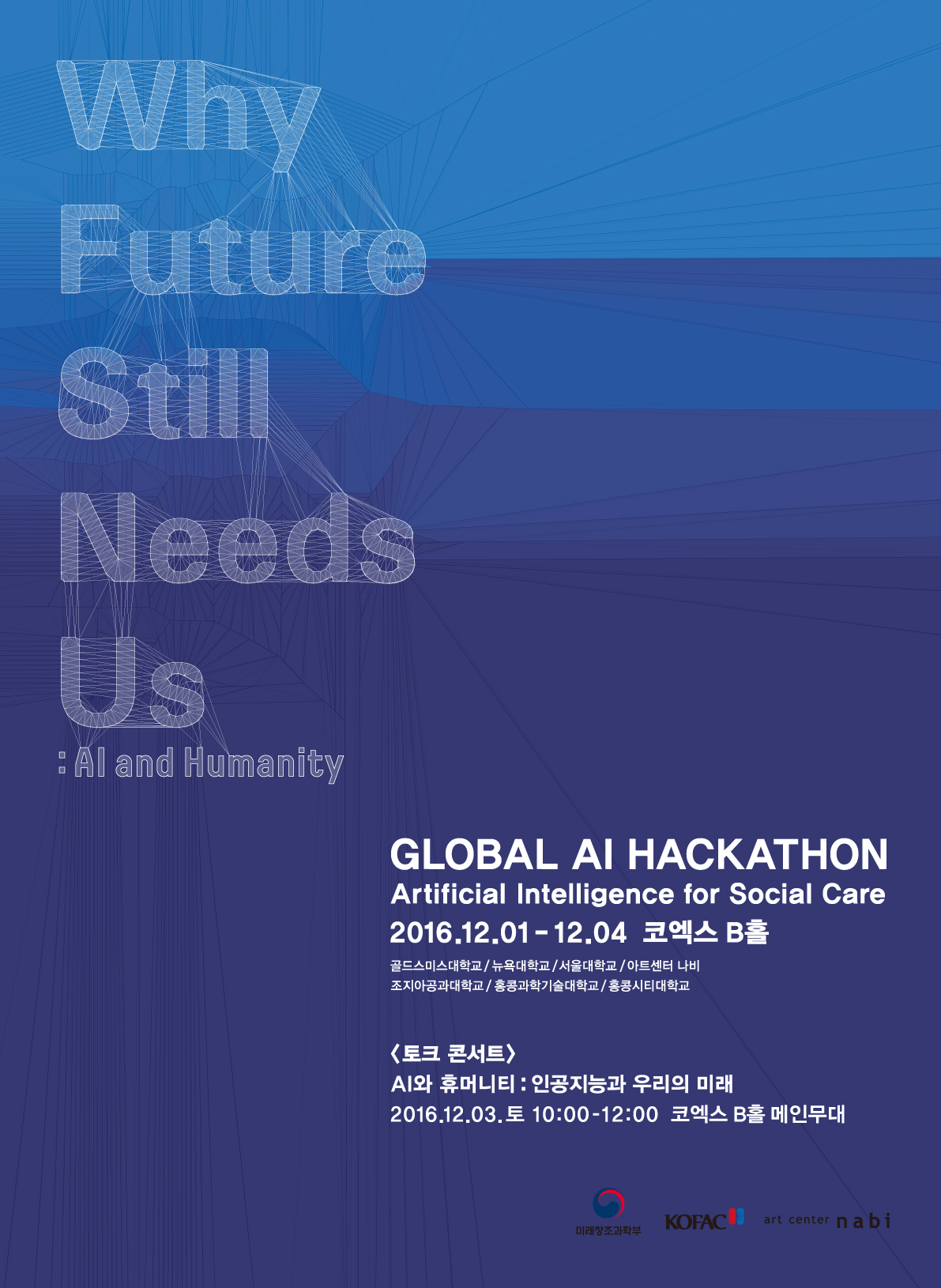 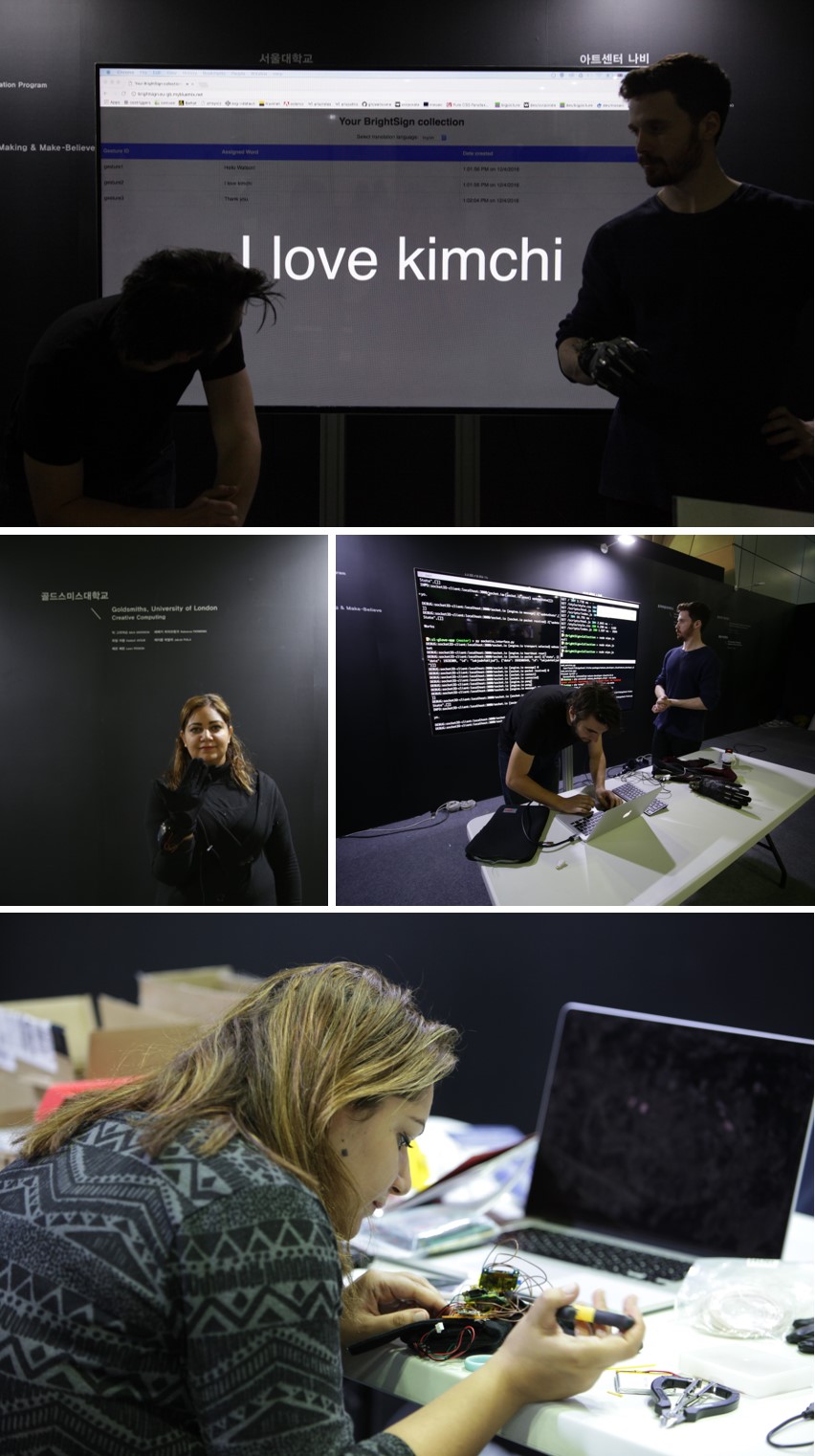 프로젝트명
Bright Sign Glove
키워드
Assistive Technology, Wearable Technology, Healthcare Innovation, Machine Learning, Gesture Recognition.
컨셉 및 기획의도
While accessible technology is becoming more and more common in recent times, the efforts to break the communication barrier between sign language users and non-users are yet to leave the world of academia and high-end corporate research facilities. Inspired by and building on Hadeel Ayoub’s research to date, we have  strived to build a wearable, integrated and intuitive interface for translating sign language in real-time.
기술소개
The Sign Language Data Glove is equipped with flex and rotation sensors and accelerometers that provide real-time gesture information to a classification system running on an embedded chip. We have used various IBM Bluemix services to perform text-to-speech conversion and language translation. The embedded system include a speaker and a screen to display and speak detected words. From a UX viewpoint, we are aiming to crx-eate a smooth experience minimizing the setup and maintenance interactions by providing a set of utility gestures. We have used IBM cloud services and local storage to transfer and cache data to enable offline usage. We have built a simple web application to manage custom gestures uploaded from the embedded system to the IBM cloud.
Material

팀소개Hadeel Ayoub, PhD researcher in Arts and Computational Technology, Jakub Fiala MSci Creative Computing, Leon Fedden, Creative Computing undergraduate. Hadeel, Leon and Jakub are researchers from London, based at  Goldsmiths, University of London and the Welcome Trust and working in the fields of accessible technology, creative computing and machine intelligence. 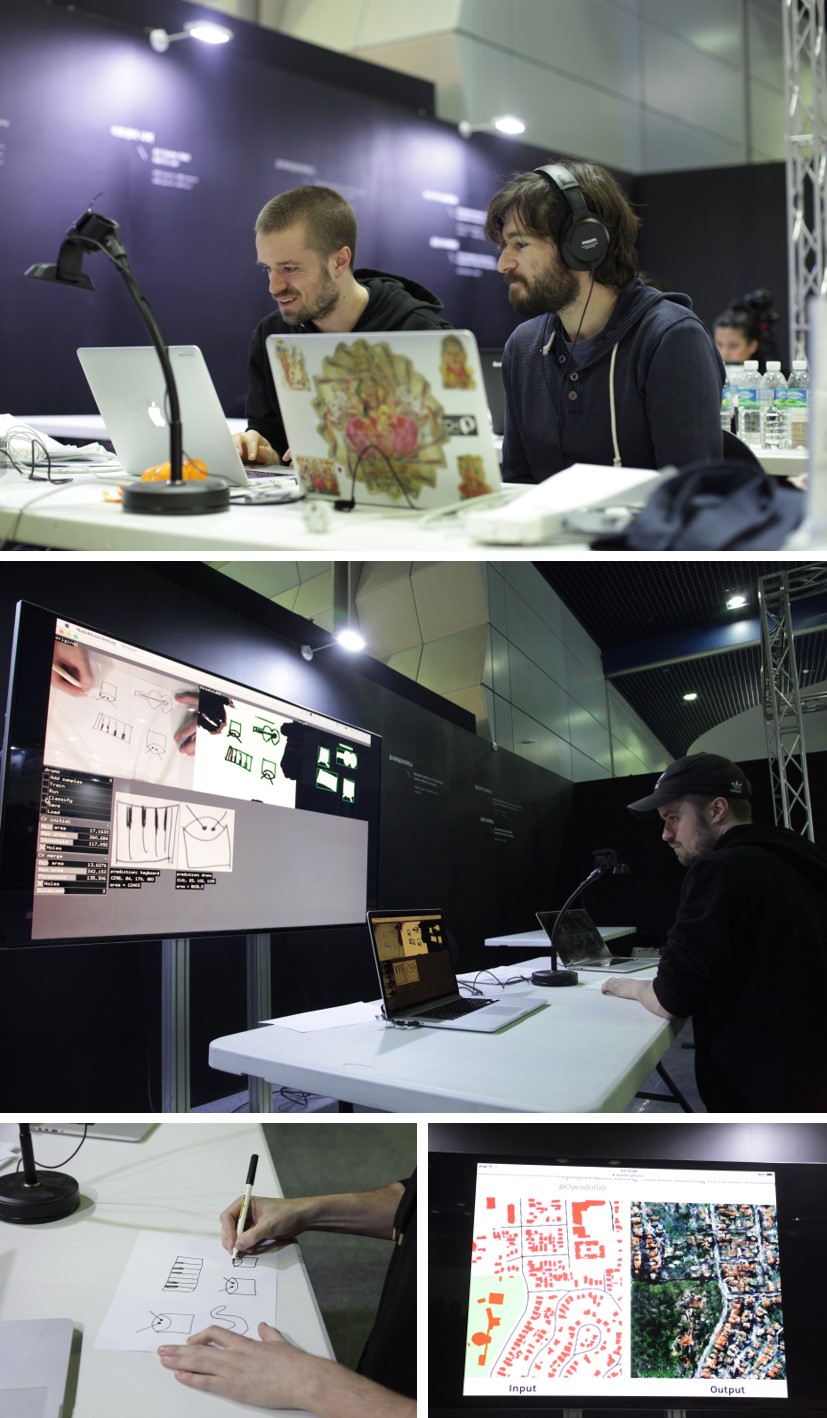 진코건 & 안드레아 레프스가르드 Gene Kogan & Andreas Refsgaard
프로젝트명
Doodle Tunes
키워드
머신러닝 / 음악
컨셉 및 기획의도
This project lets you turn doodles (drawings) of musical instruments into actual music. A camera looks at your drawing, detects instruments that you have drawn, and begins playing electronic music with those instruments.
기술소개
It’s a software application, built with openFrameworks, that uses computer vision (OpenCV) and convolutional neural networks (ofxCcv) to analyze a picture of a piece of paper where instruments have been hand drawn, including bass guitars, saxophones, keyboards, and drums.
The classifications are made using a convolutional neural network trained on ImageNet, and sends OSC messages to Ableton Live, launching various clips playing the music for each instrument.
The software will be made available at https://github.com/ml4a/ml4a-ofx
Material
openFrameworks (including mainly ofxOpenCv, ofxCv, ofxCcv, ofxAbletonLive), a stand and attached web camera, some paper, and pens.
팀소개 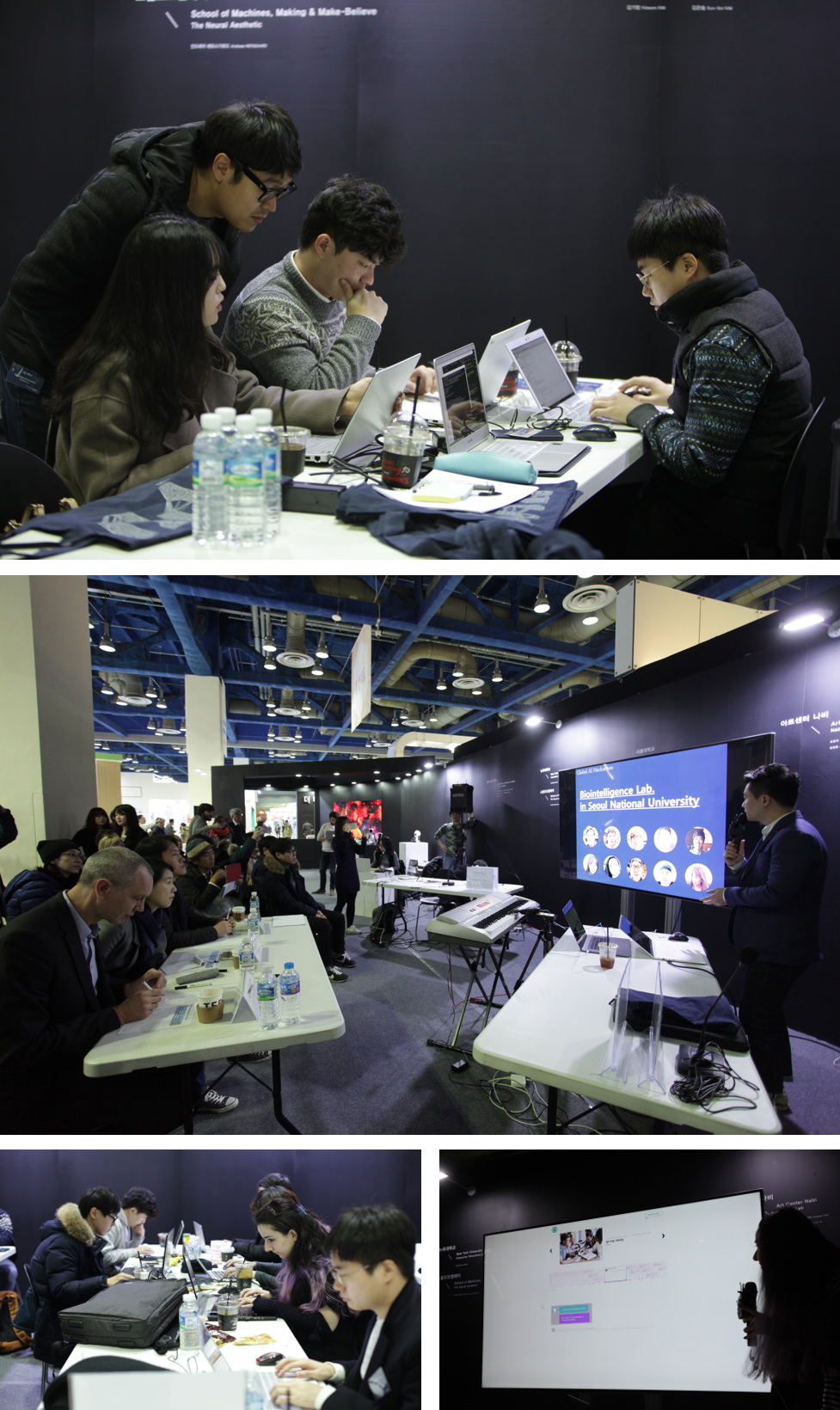 서울대학교Seoul National University
프로젝트명
AI Scheduler: Learn your life, Build your life
키워드
Automatic scheduling / Daily life pattern / Deep learning / Inverse reinforcement learning / Wearable device
컨셉 및 기획의도
In this project, we explore the possibility of an AI assistant that will have a part in your life in the future. Being able to predict your daily life patterns is an obvious necessary function of an AI assistant. In this respect, we focus on the theoretical issue of how to learn the daily life pattern of a person. For this hackathon, we developed a system which can automatically recognize the current activity of a user and learn activity patterns of the user, then predict future activity sequence.
기술소개
From wearable camera and smart phone data, the system can automatically recognizes user’s current activity, time and location information. For this part, the visual recognition API of Watson and several machine learning algorithms were used. Based on this information, the system learns the patterns of user’s daily life. We devised the learning algorithm based on ‘inverse reinforcement learning’ theory so that the life pattern of the user can be learned properly. Then, the system can generate life pattern of future. Also, as a scheduler, it is desirable for the system to interact with the user and reflect the user’s intention. Therefore, we developed a web-based interface which can interact with the user by natural language. For this, IBM Watson’s conversion service alongside with text-to-speech/speech-to-text was used.
Material
TensorFlow, VGG Net, wearable camera, web-based interface (IBM Bluemix Conversation Service, speech to Text Service, Text to Speech Service, Node-Red).
팀소개
We are graduate students at the Seoul National University, Biointelligence Laboratory. We are interested in the study of artificial intelligence and machine learning on the basis of biological and bio-inspired information technologies, and its application to real-world problems. 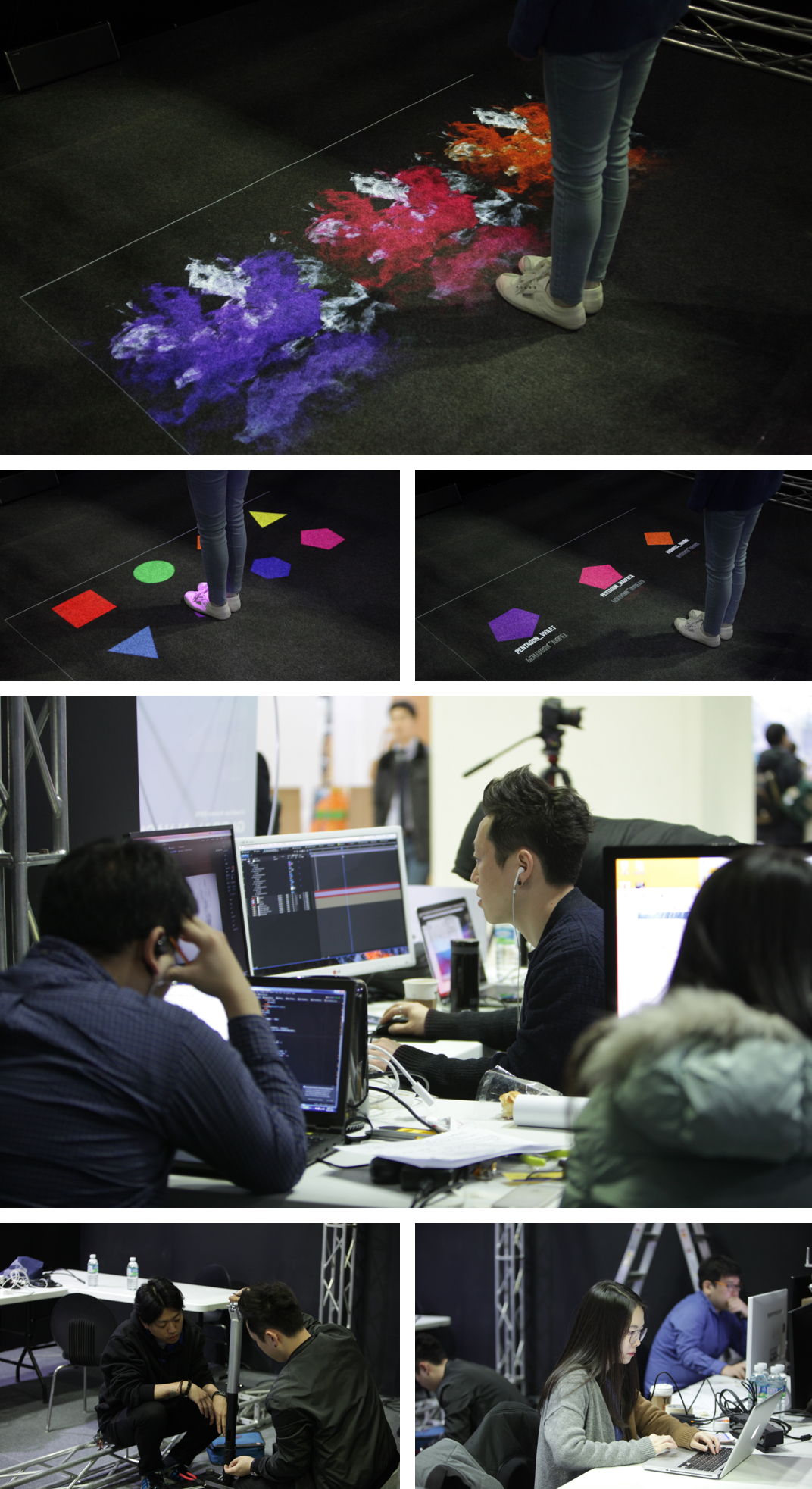 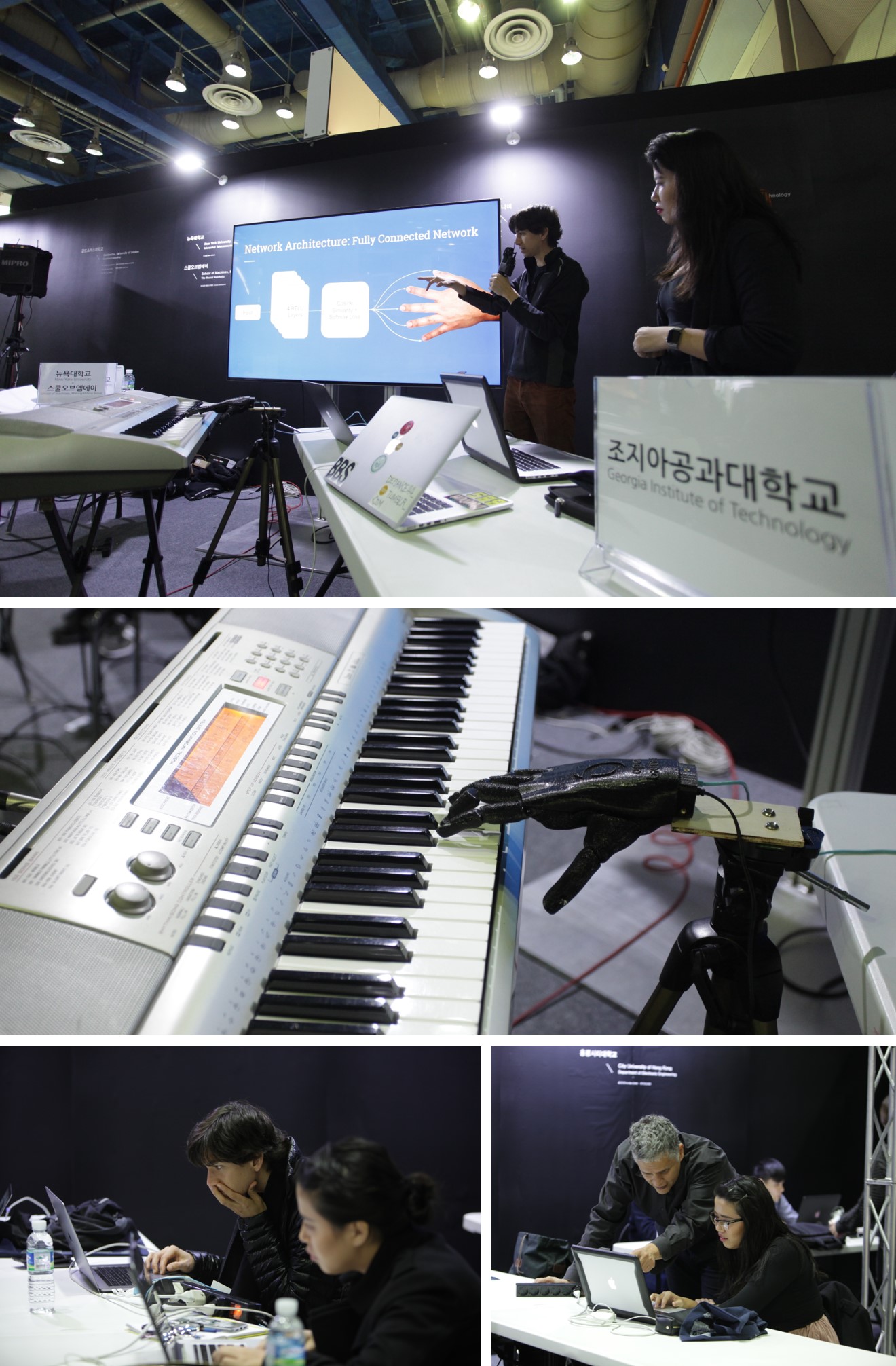 조지아공과대학Georgia Institute of Technology
프로젝트명
Continuous Robotic Finger Control for Piano Performance
키워드
로보틱스, 딥러닝, 머신러닝, 컴퓨터비전, 로봇뮤지션
컨셉 및 기획의도
This project uses deep neural networks to predict fine-grained finger movements based on muscle movement data from the forearm. In particular, we look at the fine motor skill of playing the piano, which requires dexterity and continuous, rather than discrete, finger movements. While this project is most directly applicable to giving musicians with amputations their musical ability back through smarter prosthetics, the demonstration of successful fine motor skills from our deep learning technique allows for promising applications of this method and our novel sensor throughout the medical and prosthetic fields.
기술소개
The final deep learning techniques used to successfully demonstrate the continuous robotic finger control was a four lax-yer fully connected network followed by cosine similarity and a softmax loss. Images were normalized before input and batch normalization was used to smooth out the regression results. In post-processing, noisy regression results were further smoothed with a filtering step. To implement this network and run our prior experiments, we used Tensorflow, Torch, and pre-trained networks from Inception to construct our deep networks.
Material
Deep learning libraries: TensorFlow, Inception, Torch
Data collection: glove bend sensor, MIDI output from keyboard, muscle sensor
팀소개
Mason Bretan and Si Chen are PhD students working in robotic musicianship and computer vision, respectively. Gil Weinberg is a Professor in the School of Music and the founding director of the Center for Music Technology. They are based at the Georgia Institute of Technology, within the Center for Music Technology and the College of Computing, School of Interactive Computing. 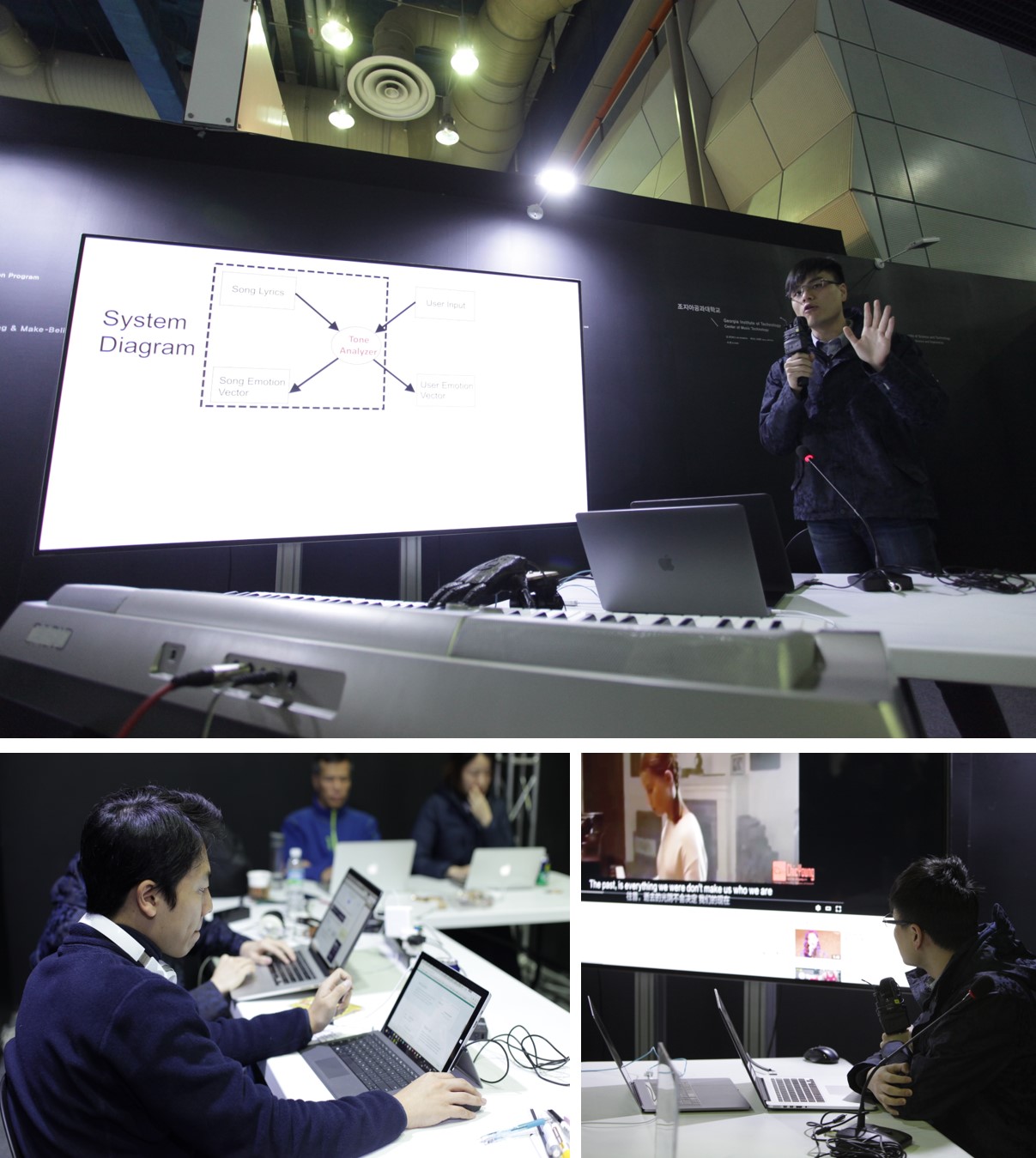 홍콩시티대학교 & 홍콩과학기술대학교City University of Hong Kong & Hong Kong University of Science and Technology
Cognitive DJ
키워드
IBM Watson, tone analysis, conversation, emotion vector, music recommendation
컨셉 및 기획의도
The project aims at developing a novel Cognitive DJ for users based on their emotion. Current music recommendation system requires the user to search the exact music manually and/or is based on user history. However, such existing approach is unable to reflect or meet their emotional needs in real-time. By interacting with Cognitive DJ through text or speech, the system will recommend music based on the current emotion status. The Cognitive DJ can analyze the conversation content and the tone for each user to recommend the right song at the right moment.
기술소개
We have established a music database, which includes songs from diverse categories. The IBM Watson tone analysis is applied to the lyrics of each song to derive the emotion vector with 5 different scores, indicating anger, disgust, fear, joy, and sadness. Based on conversation service provided in IBM Watson, we have crx-eated our workspace including intends, entities, and dialog. The conversation with the Cognitive DJ is carried through an user-friendly interface. Based on the user’s conversation with the Cognitive DJ, the emotion vector of the user is derived and compared with the emotion vectors of all songs. A song that has closest emotion score with that of the user will be recommended. New recommendations will be provided as the user continues the conversation with the Cognitive DJ.
Material
Python, Java, IBM Watson.
팀소개
Qi She is a Ph.D. student from the Department of Electronic Engineering (EE) of City University of Hong Kong (CityU), working on statistical machine learning methods for neural data analysis. Minsam Kim, Sikun Lin, and Wenxiao Zhang are graduate students from the Department of Computer Science and Engineering (CSE) of Hong Kong University of Science and Technology (HKUST), working on machine learning and time series data analysis.
The team’s mentors are Dr. James Kwok from HKUST and Dr. Rosa Chan from CityU. Dr. James Kwok is the Professor of CSE at HKUST working on machine learning and neural networks. Dr. Rosa Chan is currently an Assistant Professor of EE at CityU. Her research focuses on computational neuroscience and neural interface.